Show Us Your Moves Submission: Miranda cosplays as Chibitalia! Miranda sent us a submission of her Chibitalia cosplay from Hetalia! She utilized our Chronos wig in Copper Red to finish off the look that she needed for this costume. Check out pictures and her awesome story below! 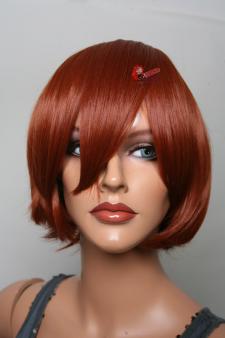 – What got you into cosplay?
I think I was browsing the Internet, looking for Death Note fan-art. I kept stumbling across photos of people dressed up in costumes to resemble the characters. At the time, I had no idea what cosplay was, so I was intrigued by all of those pictures. I ended up doing some research, and discovered cosplay.
– How long have you been cosplaying?
I was a junior in high school when I cosplayed for the first time (I somewhat cringe, since my first cosplay was a badly done L cosplay), so…I think it’s been at least five years. I was mainly only piecing together cosplays with things I had in my room. It wasn’t until Anime Central 2010 that I actually bought a wig and altered a bathrobe to put together an Edward Elric cosplay.
– Were there any particular reasons you selected this character?
I love Hetalia, and Chibitalia was one of the first characters I fell in love with. Not to mention, he’s such a fun character to play simply for the fact that he’s a chibi version of Italy. I naturally gravitate toward chibi characters. Not to mention, he’s in an interesting situation when he’s Chibitalia: he’s a boy…mistaken for a girl and is dressed like a maid in Austria’s house. *laughing*
– What would you consider the most difficult part of this costume?
Honestly? This cosplay was bought, but the difficult part was being able to fit it to my size. I’m a plus-size cosplayer, and this cosplay was definitely NOT the first choice for plus-size girls. The dress is a little snug in spots, but the apron was the worst. The way to attach it around your waist was originally velcro, but with how big I am/how short the material was, I couldn’t fasten it. I asked a friend of mine to alter it to where it’s able to be tied back, so that helped a lot!
– What cosplay would you like to do in the future?
I have so many on my list of dream cosplays, but I think the one I would LOVE to do in the future is the Red Skull from Disgaea 2: Cursed Memories. The first time I completed the game, my favorite character was the Red Skull that was in my party. Not to mention I have a thing for costumes with flowy capes and things like that. *laughing again*
– What’s your favorite part about cosplaying?
Being able to become my favorite characters for that time period. It’s one thing to write fanfiction to honor your favorite characters, but wouldn’t you rather have more fun dressing up as those characters? It lets me feel like a little kid again, and I absolutely love it. There’s a quote I saw online, and I keep it with me now: “Growing old is mandatory. Growing up is optional.”
-What do you like about our wig?
The wigs I’ve gotten from Epic Cosplay have got to be the finest quality wigs I’ve ever used. They feel and look so much like real hair, and for the most part, they’re so easy to care for! I’ve received so many compliments on the wigs I used from your site, and I can’t help but agree with them. The wig I used for my Chibitalia cosplay was the Chronos 14″ Copper Red Short Cosplay Wig. I’ve bought three other wigs for myself (Apollo Spiky Layered Black Short Cosplay Wig, Chronos 14″ Honey Blonde Short Cosplay Wig, and Theia 20″ Copper Red Long Straight Cosplay Wig), and my friend has bought two wigs as well (Chronos 14″ Classic White Short Cosplay Wig and Apollo Spiky Layered Silver Short Cosplay Wig). We’re so happy with our wigs that we recommend your site to everyone that asks us about our wigs.
02CR anime chibitailia Chronos Copper Red cosplay epic cosplay hetalia manga wig
Leave a comment
Recent Posts