Show Us Your Moves Submission: OwlDepot cosplays as Phantom Miria We recently received an EPIC show us your moves submission from OwlDepot! She created her beautiful Phantom Miria cosplay from the Claymore series and used our Aphrodite wig in Natural Blonde as a base wig to achieve her look. She added some wefts to the wig so she could pull it up into the ponytail she needed. Check out pictures and her story below! 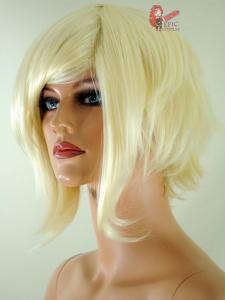 I have always had an interest in anime and manga since high school, but didn’t try to pursue actually cosplaying until 2007. I was fascinated by the fact people would run around costumed as their favorite characters at a convention. So I decided to give it a try as well, and loved it. I’ve made a lot of friends and learned a lot of things through this hobby. Most of my costumes are self made and I take great joy in completing a costume. Often, I do multiple versions of a character I really like.

A lot of people recommended Claymore to me over the years before I actually gave it a chance. I watched the anime first and grew to like it, minus the shoddy way they ended it. Not satisfied with the anime ending, I picked up the manga and was hooked. I love most of the main cast, but Phantom Miria was one of my more favorites. When I entered into the time skip, I really loved their Seven Ghosts outfits and collaborated with my friend Zalora Silver to be my Clare. Two Claymores are better than one. We shared supplies and fabrics to make sure our outfits matched, Zalora made both our Claymores herself! I would have to say the most difficult part of this costume was the boot covers. I started the base with black slip-on shoes and used e6000 to attach my spandex boot cover to the shoe. The snag I ran into, was making sure the belts around the thigh didn’t move around. I ended up having to sew them onto the boot cover, so the belts wouldn’t shift around.

I had a really hard time finding a wig that had a middle part, which is one of the key features of Miria’s hairstyle. Most people part normal wigs, but I really wanted a more natural looking part as opposed to seeing crimped hair and wefts. I used Epic Cosplay’s 15″ Midpart wig in Natural Blonde, because it was pretty much perfect for the character! Perfect color, perfect parting in the middle, and my friend who did Clare with me was able to use another one of Epic Cosplay’s wigs to match mine. I added some extra wefts to the nape so I could pull the wig into a ponytail and added wefts to the side fringe areas for more volume since Miria’s hair is layered all over. It’s nice to have color matching wefts readily available. I own quite a few wigs from Epic Cosplay, mostly because I like the fiber quality and the fact that the wigs are a perfect fit for my head. Neither too big or too small!