Show Us Your Moves Submission: Rachsaysmer Cosplay as Yoko Check out Rachsaysmer Cosplay’s story about how she got innovative with our Athena wig in Apple Red (replaced by Persephone in Apple Red) and turned it into the perfect wig for her Yoko cosplay from Gurren Lagann! We were so excited to read about how she styled this wig to obtain the look she needed! 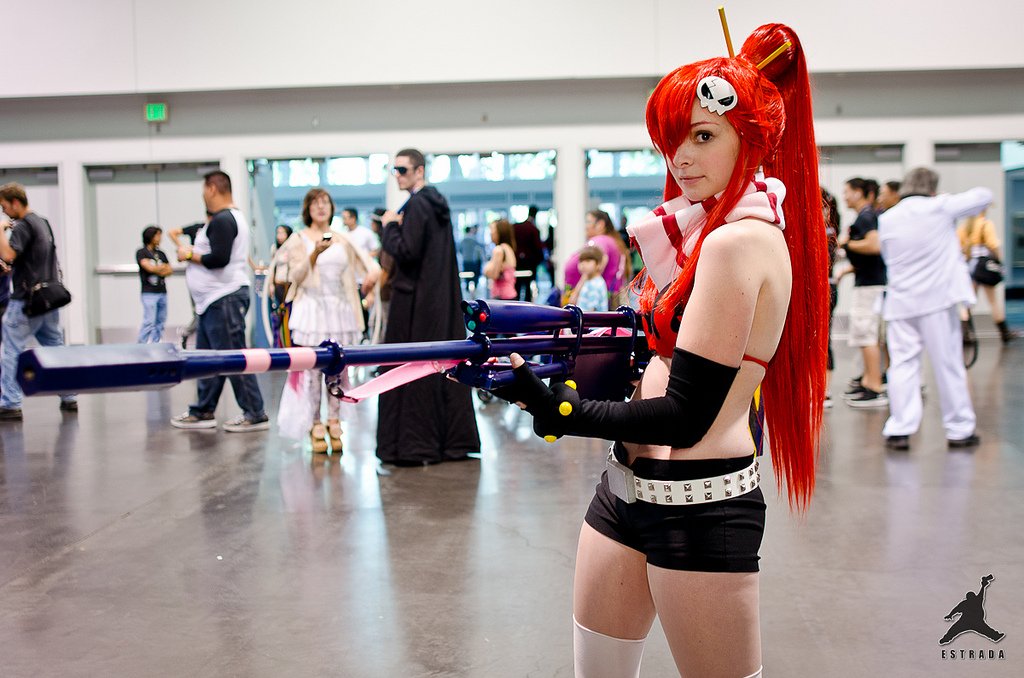 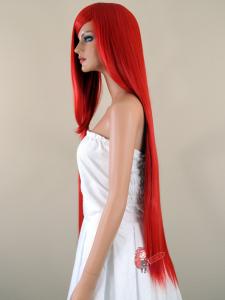 I would like to “show you my moves” in one of your lovely epic cosplay wigs. Attached are 2 images of my Yoko cosplay from Gurren Lagann where I’ve received permission to submit from both photographers, Erik Estrada and JProProductions of Gigaventure.

The wig I used was a 40″ Apple Red Straight Long Cosplay Wig. At the time you guys had not added the ponytails so I got a bit creative to make mine.

Not wanting to do the stubbing method to high ponytails I decided to keep my wig as intact as possible in case I wanted to switch to a down hair style. I cut and styled the bangs as well as the front pieces of hair. From there I salvaged some wefts from the back of the wig in various places and set them aside. At the same time I took whatever fibers I had cut from the bang styling and covered a hollowed out foam cone with them and attached the salvaged wefts to it as well. I slowly brought up the fibers in the back on the wig to one single point where the ponytail would start, taking those fibers and having them run through the hollowed out cone which I then sewed to the wig. This way I’d be able to keep the long fibers intact but still getting them up to the ridiculous ponytail height. I then pulled back the remaining fibers to make the attachment seamless.

As for the costume itself I bought the hair clip but made the chopsticks myself. With the neck piece, bikini top, gloves, cape, and shorts I made them from scratch. As for the belt I bought a plain white belt and added the studs and giant belt buckle and the thighhighs were cut off from some girl’s tights. My boots I cut, painted and added the zipper element with craft foam. The gun is mostly made from PVC pipe, plastic bats, cardboard, and foam. It’s super light weight and breaks down for easier transportation.

What originally got me into cosplay was I went to my first AX in 2005 and saw all these people dressed up in costumes and thought “I have some decent sewing skills and my hair is kind of like Edward Elric’s so why not?” and took advantage of my sewing class during the school year and made the black jacket as my final project. It kind of just took off from there.

I’ve been cosplaying for over 7 years now.

With Yoko there was always this hesitation because some only view her as a fan service character. In reality though, she’s a very strong woman who not only saves the men around her countless times but eve shows she doesn’t need one to continue living her life. I really do love her because of that.

The wig and gun. My first attempt at the wig was sad until I fixed it into this new revamped version. Plus my gun has taken a beating and has broken at conventions. Hopefully I’ve fixed that problem now though.

Being someone else for the day. Plus just creating something and knowing that you did. There’s no other feeling like wearing what you love and created.

I absolutely love using Epic Cosplay wigs because of how soft and full they are as well at the actual quality which helps with the whole tangling issue.

Thanks for taking the time to review my lengthy submission!