Show Us Your Moves: Treedon cosplays as Lucy! We have another entry for our Show Us Your Moves contest!  Here we have Treedon as Lucy from the series Elfen Lied!  She used our Chronos Wig in Raspberry Pink (color replaced by a mix) to help get Lucy’s hairstyle down!  Have a look at her cosplay and read on to see more about her! 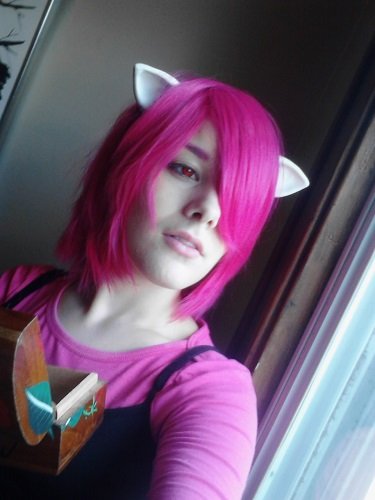 Hello! My name is Treedon and I was interested in sending in a photo of my Lucy cosplay from Elfen Lied. I had worn the costume to the Sangawa Project 2012 and wanted to express my love for EpicCosplay wigs! I love every wig’s high quality and their ability to fool strangers into thinking that the wig is actually my real hair. I have watched anime since I was young and always wanted to cosplay but it wasn’t until I fell in love with a boy that likes to cosplay that I did my first cosplay as Lucy. I chose Lucy’s short hair length  because she had cut her hair to remind Kohta of his sister when she was Nyu, a childish personality due to head trauma. When she was herself, she and Kohta had a romantic moment with the outfit that I was wearing. The wig used was Chronos: Raspberry Pink 14″. The most difficult part of the costume was the horns that Lucy had. I hand made the horns and attached them to a headband which was under the wig and threaded through the layers of hair carefully. Cosplays I will do in the future include Seras and Alucard from Hellsing, Holo and Lawrence from Spice and Wolf, and Nia and Simon from Gurren Lagann. I plan to do those for Tekkoshocon 13 in Pittsburgh, PA this year. I just ordered about six wigs to play with for this convention! I hope to take better pictures to turn into Epic Cosplay because I will only buy wigs at your store. The fact that I can manipulate my wigs with a straightener or curling iron, dye them, and have such a wide variety of color and length to choose from makes me want to stay with Epic Cosplay as a life-time store for all my cosplaying whims! I know that the life expectancy of each wig purchased is well worth my money spent. Attached are two pictures: the first picture is of me holding a ‘music box’ and the second picture is my boyfriend Jonathan and I(Treedon) cosplaying as Kohta and Lucy as a couple. He does not have a wig on and I understand if that picture is immediately disregarded for any use, especially since we are showing affection, but he should have some wigs coming in the mail soon, hahah! Thank you for your time and I hope you have a wonderful day!